Image copyright Getty Images Image caption Pope Francis made a pilgrimage to the Greek island in October 2015, during his first official trip to Europe Pope Francis has called for an end to European… 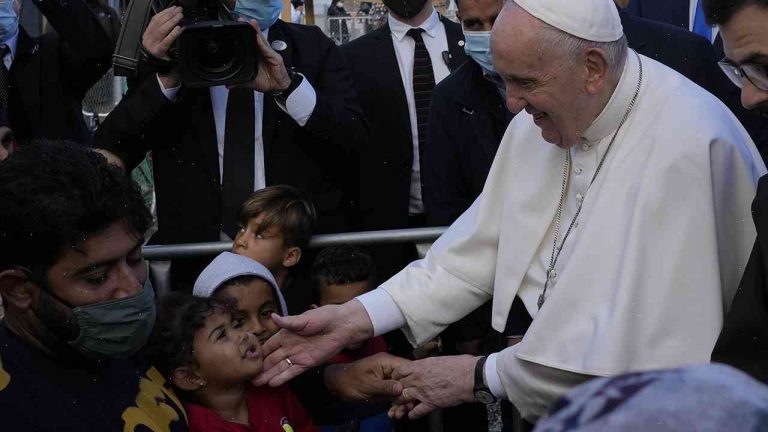 Image copyright Getty Images Image caption Pope Francis made a pilgrimage to the Greek island in October 2015, during his first official trip to Europe

Pope Francis has called for an end to European immigration policies that “refuse the vulnerable the possibility of a peaceful and dignified existence”.

He made the comments during a visit to Lesbos, Greece’s largest refugee and migrant island, where he visited the island’s lone Catholic Church.

The Pope said he wanted the detention centre on the island to be shut.

More than 200,000 migrants and refugees have arrived on Greece’s islands since 2015.

Nearly 900 migrants died or went missing on land and sea journeys between Turkey and the Greek islands in 2016.

The Pope arrived in the Greek capital, Athens, on Friday, capping a week-long trip which included stops in the Lebanese capital, Beirut, and Rome.

On Thursday, he visited Tripoli, Libya, urging the government and people to find ways to peacefully resolve the crisis.

He also gave thanks for the protection provided by the Catholic church, saying it “is not charity and it is not charity in a form of flattery”.

“This church is not for the world of man, but for the face of God,” he said during his stay in Lesbos.

The Pope chose to visit the island in his first trip to Europe, hoping to bring peace and aid.

Earlier in the trip, Pope Francis said the Catholic Church would help those who seek asylum in Europe “show love and compassion to the most marginalised and the most vulnerable”.

Only the Holy See can take refugees.

And in February 2016, Greece was forced to begin imprisoning migrants who had been refused the opportunity to apply for asylum on the island.

This practice was temporarily suspended by Greece in February but then reintroduced after last month’s deal was signed between Turkey and the EU.

After the Paris attacks in November 2015, Pope Francis spoke out against European immigration policies.

He called for them to accept more refugees on a humanitarian basis and voiced concern that the migrants would not receive a “human reception”.

Speaking in Rome last week, he said that while there were economic reasons for migration, Europe should also remember its Christian roots.

“Religion is another source of fraternity and solidarity,” he said.

“People should not abandon religion and the truth to specialists.”