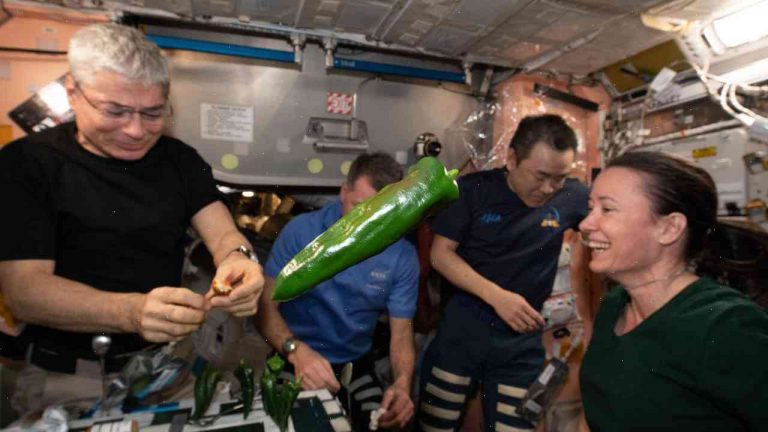 They might not have space-grown green vegetables to eat, but US astronauts on the International Space Station have just pulled off an American first: they have eaten a pepper from space for the first time.

Ryan McCarthy and Josh Cassada, Expedition 55 crew members, have spent more than 170 days on the orbiting outpost and currently live on board the station, which is about 240 miles (385 km) above Earth.

On the heels of two successful US spaceflights, there was buzz that the pair might serve a freshly picked pepper from space.

“We were like, ‘Yeah, we can do that,’” Cassada said in a video released by NASA. “My expectation is that I would actually get a brown (pepper) at that point and it’s brown.”

On 16 December, the crew ate three Mission Control-prescribed containers of cornstarch, which they mixed with their own leftovers and drizzled with a little water. Three days later, Cassada and McCarthy each chomped on a green pepper and a red pepper from the container.

“Today is probably the most anticipated day of my career,” Cassada said as he peeled off the pepper’s outer skin, revealing the green pepper. “We are going to eat this pepper.”

The 15 purple peppers were part of a potato-derived whey concentrate released on 15 November by a California biotech company, Intrexon, which is developing applications for microgravity. It is a good environment for microgravity-grown plants because of nutrients trapped under the skin that allow light to penetrate and growth, researchers said.

McCarthy and Cassada will return to Earth on 19 February. Their long-duration stay on the space station exceeded the 22 months spent by Nasa’s George Anders and Richard Covey on ISS in 2001.

A NASA spokesman said the pepper on Friday was the first pepper eaten from space by an astronaut during human spaceflight. Cassada has been a long-duration station crew member for nearly 20 months. McCarthy is due to return to Earth aboard a Russian Soyuz capsule.