After spending 14 months on the Greek island of Lesbos, nearly 500 Syrian and Eritrean refugees from the refugee crisis have settled into their new lives in Rome, with pontiff Francis visiting their original… 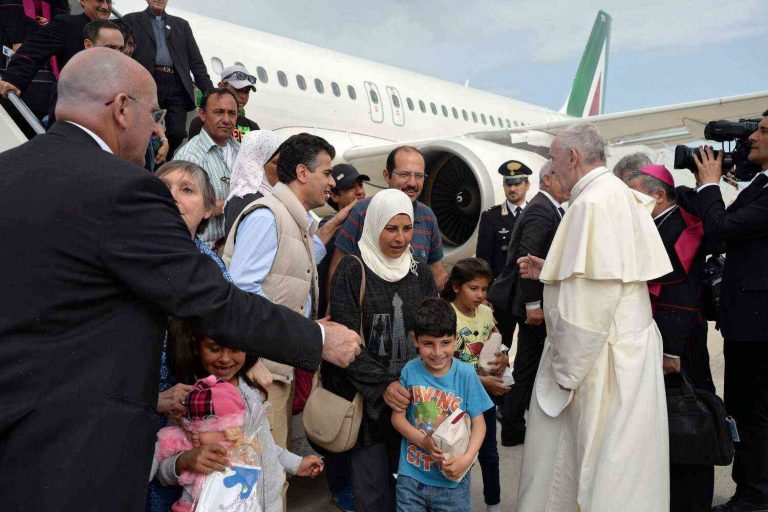 After spending 14 months on the Greek island of Lesbos, nearly 500 Syrian and Eritrean refugees from the refugee crisis have settled into their new lives in Rome, with pontiff Francis visiting their original welcome home to begin a New Year of getting to know the new arrivals.

The guests — now refugees — arrived at Rome’s Ciampino airport, with Pope Francis greeting them and offering his best wishes. “Welcome brothers! Welcome to the home of the pope,” he said. “Another year of the love that we make for our brothers.”

Francis carried out a program this week that included a special Mass in the immigrants’ honor, a meeting with immigration officials, and a chance to enjoy the City of Eternal Peace on a stroll with Italian soccer star Francesco Totti.

The Pontiff started his day with a public farewell to the migrants, saying they should be respected and welcomed as guests.

“We do not reproach you for your flight from the war. We do not fault you for your difficult lives,” Francis said to them. “But, as guests, we want respect and consideration for you, with respect, but also with a few checks along the way.”

Lesbos, an island off the Greek coast in the Aegean Sea, drew heavy international attention in 2015 when the Greek government announced it was opening its doors to more than 16,000 refugees and migrants, mostly Syrians fleeing civil war. While Catholic aid groups made a point of meeting them and distributing aid, the refugees were mostly left alone — including 300 who died at sea over the course of the year.

Francis personally met with some of the migrant families on Lesbos as they were departing for Rome, and he addressed the global faith community about the human plight of migrants and refugees.

In 2016, Francis visited Lesbos as part of a mission to bring a message of compassion and care to the world’s refugees and migrants. He walked alongside refugees as they made their way to the coast, meeting them on the deck of the overcrowded Greek coast guard cutter Danaus and speaking with them in a prayer tent.

“The lone soul roams, regardless of race, religion, language, nationality, gender,” Francis said. “And the suffering of this solitary soul is also ours.”

Francis used the same blend of compassion and call to action to welcome the refugee arrivals to Rome, which he had vowed would be transformed from an overcrowded migrant landing ground into a home for struggling refugees.

“We have better among us ways to be ashamed and not ashamed of ourselves.”

On Sunday, Francis opened a new Italian government era with the installation of two of his more high-profile advisors, Finance Minister Pier Carlo Padoan and Prime Minister Giuseppe Conte. Those appointments were expected to symbolize the close relationship between the Pope and Conte, whom Francis had met twice since July.